Ten Thousand Quarters…
Some time after completing a home, our customer called with what we thought was an unusual request. He said,”Could you do me a favor and hold some money for me?” Our response as you might imagine was, “Certainly, what do you want us to do with it?”

He related that he wanted to build a deck on his house that we had previously priced, but he could not afford at the time. He also said that he had just hit a 10,000 quarter jackpot on the slot machines in Cripple Creek. He wanted us to hold the money until he was able to save the balance he need for that new deck. Within a few days he gave us twenty-five one hundred dollar bills and about a month later he came up with the rest of the cost of the deck. Not long after that, we constructed his new deck.

Since that time he has contacted us about building another deck. We wonder if he has been playing the slots again.

CPF (Cost Per Flush)…
Prior to the construction of any home, we conduct a soils investigation with an engineering company to tell us the type of soils we will be dealing with. In this case the report came back “Drill Refusal at 1′ ” That was not a good report! It told us there was solid rock one foot below the surface. Because we were constructing a mountain home we needed to excavate not only for a foundation, but also for a septic system.

We told the homeowner before we started work that we had absolutely no idea how much his excavation costs were going to be. He confidently said, “I think we can make it work; go ahead and get started.”

It took literally three hundred sticks of dynamite and two additional months for the excavation of the foundation and septic system. This would amount to something similar to the amount of explosives necessary to mine one hundred thousand tons of gold ore in Cripple Creek. The final bill for the excavation was $35,000 more than our original budget. The owner elected to pay for this additional expense by adjusting his loan, telling us he was going to amortize the additional cost over thirty years.

Because the homeowner worked in finance, he felt compelled to develop a cost analysis for the additional cost of his septic system. There is now a sign above each toilet displaying his “Cost Per Flush” analysis. The heading on the sign says something like, “Now You Know Where All My Money Is Going.” 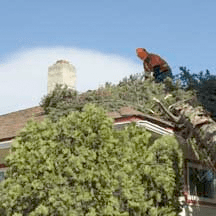 The Big Tree…
Some of the lots in El Paso County are covered by a Hill Side Ordinance, which requires an inspection by the county development personnel to see what areas of the lot are going to be impacted by the proposed construction.

One of their major objectives is to protect as many trees as possible, especially the large ones. This particular lot had a seventy-five foot Ponderosa pine in the front of the lot which would have placed it about twenty-five feet from the front porch.

Our homeowners were very concerned about the safety involved with this tree and therefore requested that we remove it. We made our case to the city because we believed it had the potential to fall in a big wind and take a major portion of the new home with it. The city refused our requests citing the value of the tree to the hillside.

During the foundation excavation, we went to great lengths to protect the tree and its root system. During the construction of the house we got one of our typical summer thunderstorms. The tree was struck by lightning which blew up the top third of the three sending a two foot diameter piece through the roof.

We called the city to report this incident and again requested permission to remove the tree. With some skepticism they came up the the construction site and approved the removal of the remaining portion of the tree.

We later told the homeowners that we appreciated how well connected they were with God and that we would be talking to them about any future zoning issues we needed resolved.